Remember the winter? You know, when it was snowing, or temperatures were in the single digits with sub-zero wind chills? Good times, right? No? You sure? Well, then, have we got a forecast that you’ll like!

A ridge of high pressure will be in place aloft, and that means it’s going to be hot for the next several days. Image provided by Tropical Tidbits.

The forecast for this week is actually fairly simple. With high pressure both at the surface and aloft, we’re going to have mainly hot, humid, and dry conditions for the next several days. That means daytime highs mainly in the 90s and nighttime lows mainly in the upper 60s and 70s. The exception will be along the coast, where a seabreeze will bring some relief, but it likely won’t penetrate too far inland. 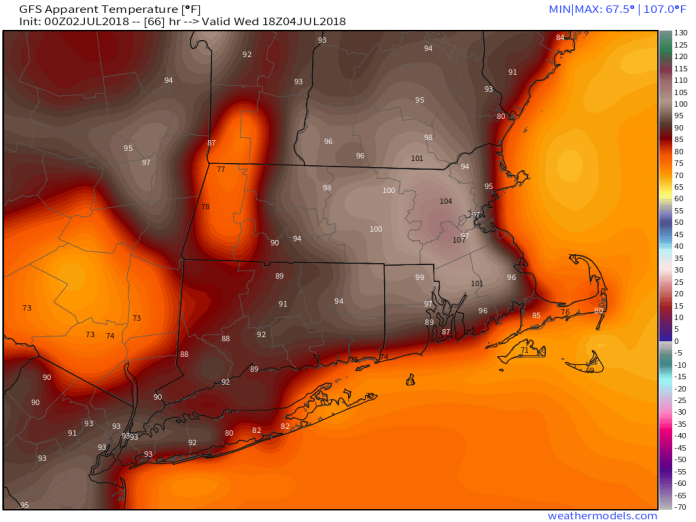 Don’t get cooked at a Fourth of July Cookout! Temperatures will feel like they are over 100 during the afternoon across much of the region away from the coast. Image provided by Weathermodels.com.

We may also have a few pop-up thunderstorms to deal with during the afternoon hours of Tuesday, Wednesday, and Thursday. We’re not expecting these to be widespread, in fact, there may not be any at all during some of these days. The ones that do form could produce some heavy downpours and gusty winds, which will also cool things off fairly quickly.

At least one model is showing a few pop-up thunderstorms Tuesday afternoon. Image provided by WeatherBell.

By Friday, things start to change. A cold front starts to approach from the Northwest. Ahead of this front, it’ll be hot and humid again, so we’re expecting showers and thunderstorms to develop. With the front providing some the lift, and an unstable airmass in place, thunderstorms should be more widespread, and they could be quite strong, possibly even severe. We’ve got several days to see what happens, but things could get interesting Friday afternoon and evening. High pressure returns next week with drier and somewhat cooler conditions.

Monday: Sunshine and a few clouds, humid. High 89-96, cooler along the coast.

Tuesday: Partly to mostly sunny, chance for an afternoon shower or thunderstorm, humid. High 91-98, cooler along the coast.

Independence Day: Plenty of sunshine, slight chance for a late-day shower or thunderstorm, humid. High 90-97, cooler along the coast.

Thursday: Partly to mostly sunny, humid, a late-day shower or thunderstorm can’t be ruled out. High 89-96, cooler along the coast.

Friday: A mix of sun and clouds with showers and thunderstorms possible during the afternoon and evening. High 84-91.