This week’s outlook is a lot like last week’s. Dry weather during the week thanks to a large area of high pressure, then questions for the weekend.

For Monday through Friday, we’ve got a large area of high pressure in control. We’ll still have plenty of clouds around on Monday as an upper-level low pressure system moves across the Northeast. Clouds may linger into Tuesday, and with a northerly flow, we could even see some ocean-effect snow showers across the Outer Cape late Tuesday and Tuesday night. Not much accumulation is expected, but a few spots on the Outer Cape could see an inch or so. Wednesday through Friday will feature partly to mostly sunny skies, with chilly temperatures for Wednesday and Thursday, and some moderation on Friday.

That brings us to next weekend. Once again, many of the models are showing the potential for a storm to impact the region. Some of the models even have it as a powerful storm. Once again, they aren’t anywhere close to agreement on the track of this system though. Some have a storm so far offshore that it will have little to no impact on us. Some have it so close that we get moderate to heavy snow inland with rain across southeastern New England. Others have it just far enough offshore to impact only areas south of Boston. On top of that, many of these models haven’t been consistent from one run to the next.So, once again, we’ll just wait and see what develops. If it looks like it could be a threat, we’ll have a special blog post later in the week.

We’ve actually got a quiet week coming up. The weekend might not be quiet, but we don’t have much to worry about before then.

A large area of high pressure will build in and remain in control through Friday. That means we’ll have dry and chilly conditions through Wednesday, but as the high slides off to the east, temperatures will moderate for Thursday and Friday, likely to above normal levels for late January. That should allow the snow from Saturday’s storm to melt for the most part. The only exception to the dry forecast is across Cape Cod, especially the Outer Cape, where some ocean-effect snow showers are possible today and again on Tuesday.

Next weekend, things get complicated again. We’ll have a low pressure system moving towards the Great Lakes and a secondary area of low pressure developing near the Mid-Atlantic states. Some of the models show an upper-level low pressure area moving toward the East Coast at the same time, which would slow down or even stall out that developing surface low. The forecast will obviously depend on the development and track of that low, and at this point, it’s still 5-6 days away, so we’re not even going to attempt to nail down any details. We’ll just say that the potential is there for a long-duration storm that could produce snow or rain (or both). Obviously, the best chance for snow would be farther inland. Assuming this storm develops and looks like it will have a significant impact on the region, we’ll do a special blog post later in the week.

Monday: Partly to mostly sunny, except plenty of clouds across Cape Cod with a few snow showers possible, mainly across the Outer Cape. High 21-28.

Monday night: Clear and cold. Low 8-15, possibly a little colder across southern New Hampshire and into the Merrimack Valley.

A cold and very dry airmass is in place across New England to start Saturday, thanks to a high pressure area moving across Northern New England. Temperatures are starting the day in the single numbers and teens, with dewpoints near or below zero. Meanwhile, a storm system will be moving out of the Great Lakes and heading for Northern New England later today. That will be out weather-maker for tonight and early Sunday.

We’ll see high clouds start streaming in by midday, and they’ll thcken up during the afternoon. It’ll take some time for the air to moisten up, but it will eventually, and snow will start falling right around dinnertime for most of us, a little earlier to the west. This will be a fast-moving storm, with the snow actually tapering off and ending around midnight. It looks like any rain/snow line will be confined to southeastern Massachusetts and Rhode Island. After midnight, a little freezing drizzle or some flurries are possible as the system starts to pull away, but the accumulating snow should be all done.

The snow could fall at a decent clip during the evening hours, with some places possibly seeing an inch per hour. So, if you’tre going to be out and about, take it slow and drive carefully. How much snow are we expecting?

Behind the storm, Sunday will be a nice day, with developing sunshine and temperatures in the 30s to near 40, which will help melt some of the new snow. You’d better get out and clean up the driveway though, because everything is going to freeze solid Sunday night as another arctic airmass settles into the region. Temperatures may not get back above freezing until Wednesday afternoon, possibly not until Thursday, but a warmup is expected for the end of the week. 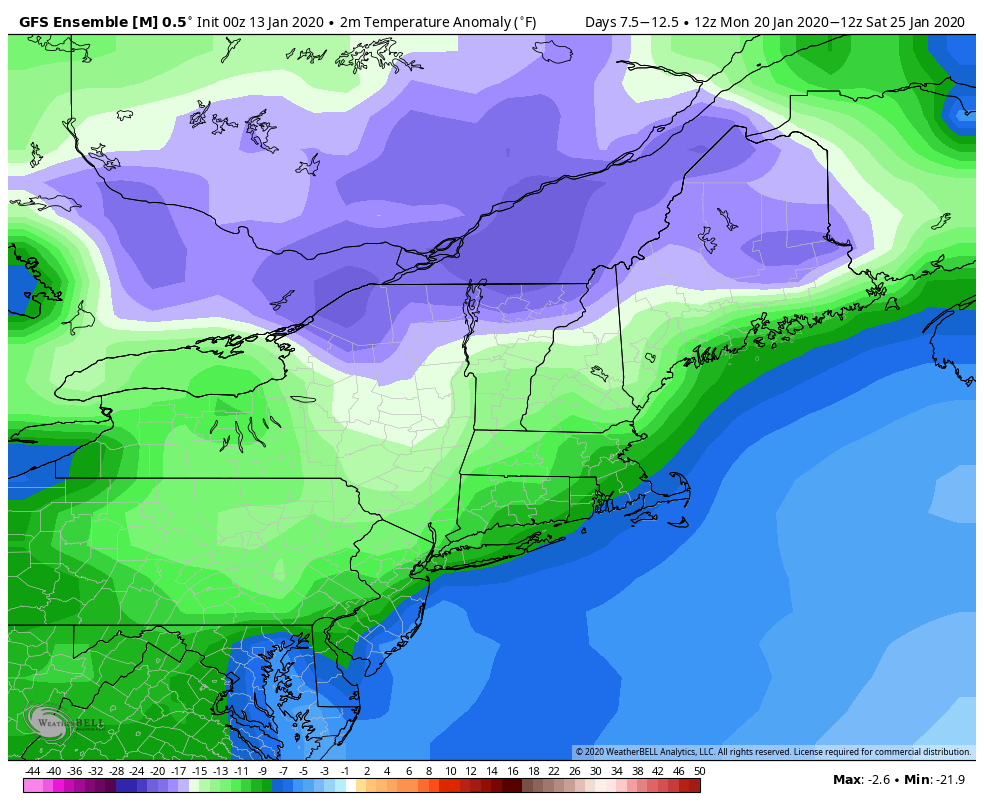 We hope you enjoyed the warm weekend, because in case you forgot, it’s January. Don’t worry, Mother Nature will remind you as the week goes on.

Record highs were smashed across the Northeast again on Sunday, but a cold front moved through during the afternoon, ending the warmth. Temperatures will still be near to above normal for the next few days, but the 60s and 70s are gone. High pressure builds into Quebec today, but there will be plenty of clouds around thanks to northeast winds off of the ocean. In fact, we could see a few flurries or snow showers, especially along the coast from Plymouth County up to the New Hampshire Seacoast. Temperatures will be mainly in the 30s, so yes, you’ll need to find your winter clothes again. As the high slides off to the east, temperatures will start to moderate again on Tuesday, but a weak system will also be moving in. This system will produce a little light rain Tuesday night, maybe mixed with some snow from the Merrimack Valley into Southern New Hampshire.

Behind that system we’ll have some clearing on Wednesday with mild temperatures, but clouds quickly come back late in the day ahead of yet another system. This system also doesn’t look like a big deal, but it could produce a little more in the way of precipitation late Wednesday night into Thursday, with a better chance for some light snow mainly north of the Mass Pike.

Once that system pulls away, gusty winds will usher much colder air into the region for Thursday night and Friday. You’ll be wishing for the 60s and 70s again, as temperatures will likely stay in the 20s on Friday, with wind chills in the single digits and teens.

By Friday night, low pressure will be starting to move out of the Ohio Valley towards the East Coast, and it will likely impact us from Saturday into Sunday. Right now, most of the models have the system track very close to or right across southern New England, but the timing is still in question (along with many other aspects of this potential storm). It’s still 5-6 days away, so things can and will change, but obviously we’ll need to keep an eye on this. Right now, the models are showing the potential for snow, changing to rain at least south of the Mass Pike, possibly farther north. We’re not going to get into many more details than that at this point, but suffice to say, if you have plans on Saturday, keep an eye on the forecast, as the potential exists for a snowstorm, possibly a significant one. Behind the storm, windy and even colder weather settles in on Sunday, and remains in place for much of next week.

Monday: Partly to mostly cloudy with a chance for some snow showers or flurries along the coast. High 34-41.

Tuesday night: Mostly cloudy with some showers likely in the evening, possibly mixed with snow from the Merrimack Valley into Southern New Hampshire, some partial clearing possible late at night. Evening low 31-38, then temperatures hold steady or rise a bit overnight.

Wednesday: Mostly sunny, but clouds start to return late in the day. High 42-49.

Thursday: Partly to mostly cloudy and windy with a chance for showers during the morning, possibly some snow showers from southern New Hampshire into northern Massachusetts. High 38-45.

We’ve got a little bit of everything coming this week – snow, rain, cold and mild temperatures. Let’s get right to the details.

A weak system moves across the region today, bringing in some snow showers, which will probably be just rain showers across southeastern Massachusetts and Rhode Island. This is not a big deal for early January. Skies will clear out behind the system tonight, but that will be short-lived, as clouds quickly come back in on Tuesday ahead of the next storm system. This one will also bring in some light snow, mainly south of the Mass Pike Tuesday night into Wednesday, with some rain possible across Cape Cod. Again, this doesn’t look like a big deal, but some places could see an inch or two of accumulation. The bigger story will be strong winds behind the system, which may gust to 40 mph.

High pressure builds in again for Thursday with much colder conditions, but then again, it’s January, it’s supposed to be cold. High temperatures may struggle to get to freezing across much of the area. Again though, this will be short-lived. A warm front moves through on Friday, with a little bit of precipitation ahead of it. This should be mainly in the form on rain, but a little sleet or freezing rain is possible across the interior. Much milder weather settles in behind the front later Friday into Saturday. Temperatures on Saturday could get into the 50s across the area. The problem is, we’ll have some rain to deal with, possibly a quite a bit of it, as a cold front will be approaching. The front moves through Saturday night, but the precipitation could linger into early Sunday. With colder air moving in, and precipitation hanging around, the potential will be there for some wintry weather, especially from the Merrimack Valley into Southern New Hampshire. Right now, it looks like the cold air will be slow to move in, so the precipitation will likely end as rain across the rest of the area. We’ll keep an eye on this as the week goes on.

Tuesday: Morning sunshine, then clouds stream back in during the afternoon. High 33-40.

Friday: Cloudy, breezy, and milder with a chance for a few showers, possibly mixed with a little sleet across the interior. High 43-50.

Saturday: Cloudy and windy with periods of rain and showers. High 50-57.

Sunday: Rain ends in the morning, possibly as a wintry mix from the Merrimack Valley into Southern New Hampshire. Temperatures will start the day in the middle to upper 30s (lower 40s south of Boston), then hold steady or drop during the afternoon.