As we start a new week all eyes will literally be looking at the sky. As you may have heard, there’s an eclipse today. The weather will cooperate, as high pressure provides us with sunshine, so viewing it shouldn’t be a problem. You’ve probably also heard plenty of people warning you not to look directly at the sun during the eclipse. Since you’ve heard it enough already, we won’t say it. Besides, if you want to look at the sun, we won’t stop you. Eyesight is overrated anyways. Plenty of people live without it. If that’s what you want, who are we to stop you? You’ll still be alive and free to go golfing in the middle of the thunderstorms we’re expecting on Tuesday. Don’t worry, they’ll likely be coming at night, so even if you were golfing, you wouldn’t be able to find the ball if you had eyesight.

Cloud cover forecast from the HRRR model for 2pm Monday. Just a few clouds around, which shouldn’t impact eclipse viewing much. Image provided by WeatherBell.

Now that we’ve given you the teaser and the sarcasm, let’s get to the details. We start the week off with high pressure, giving us a fantastic Monday. A cold front approaches on Tuesday, producing showers and thunderstorms, mainly at night. A few of these storms could be quite strong, but with the activity mostly expected at night, that should limit the potential for severe weather. Of course, that doesn’t mean you should let your guard down. These storms still could produce heavy downpours, but severe weather is still possible at night. In fact, Tuesday marks the one year anniversary of the tornado that impacted Concord, MA at 3:20 in the morning. 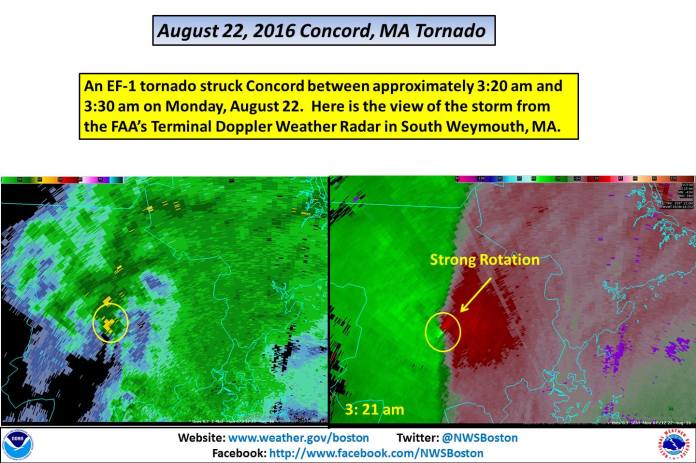 The showers and thunderstorms will taper off and end early Wednesday as a cold front crosses the region, then things get quiet again. We’ll dry out Wednesday afternoon but it will remain warm. We’ll cool off a little more on Thursday as an upper-level trough of low pressure settles into the Northeast while high pressure does at the surface, which will result in some cool days for Friday and the weekend.

Monday: Sunshine and a few afternoon clouds, dimmed for a while by a passing moon in the afternoon. High 82-89.

Tuesday: Clouds thicken up, with some showers and thunderstorms possible late in the day. High 85-92.

Tuesday night: Showers and thunderstorms likely, some of which could contain heavy downpours and gusty winds. Low 68-75.

Wednesday: Showers and thunderstorms end in the morning, then skies clear out in the afternoon. High 78-85.

Friday: A sunny start, then clouds start to pop up with a slight chance for a spot shower in the afternoon. High 71-78.

Finally, we get to a topic that doesn’t impact this week’s forecast, but could have an impact early next week. For several days now, the Canadian model has been extremely insistent on a tropical disturbance developing near the Bahamas and eventually moving northward, up the East Coast early next week. There have been a few reasons to ignore this for the past few days:

So, why are we mentioning it now? There are a few reasons.

That last point is the main reason why we at least feel the need to mention it. This model has not really wavered much at all, and consistency is one of the things we look for in a model before we start to trust its solution. Add in the fact that other models are starting to come around, and well, it’s something we need to keep an eye on. This does not mean that a massive hurricane is going to wipe out the East Coast just before Labor Day. If anything does materialize, we’ll obviously keep you informed, but for now, it’s just something to keep in the back of your mind. (Of course, now that we’ve mentioned it, the next run of the Canadian model will likely change its tune completely)