A week ago, Tropical Storm Harvey produced wind gusts as high as 44 mph in the Windward Islands. It moved into the eastern Caribbean and fell apart a few days later, degenerating into a tropical wave. Four days after that,  Harvey has regenerated into a tropical storm over the Bay of Campeche. Now, it’s setting it sights on Texas.

Sorry, wrong Harvey. This Harvey isn’t a problem at all. Image provided by WCVB. 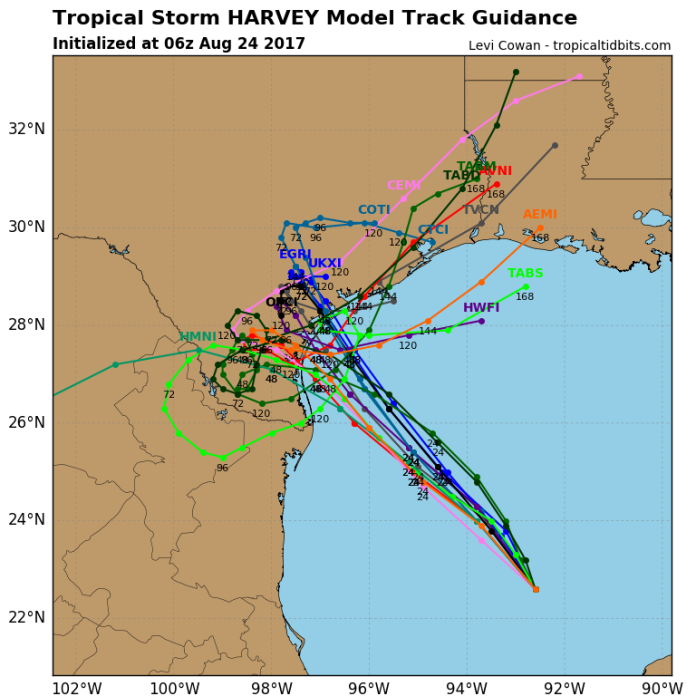 Harvey certainly looks to be heading towards the Texas coastline. Once it gets there, where it goes is a question that really can’t be answered yet. Image provided by Tropical Tidbits.

Current indications are that Harvey should continue to head northwestward while strengthening over the next day or two. Harvey should be approaching the Lower or Middle Texas coast on Friday. With warm water and low wind shear, there is a chance that Harvey could rapidly intensify on Thursday, and should become a hurricane before landfall, possibly a strong hurricane.

This Harvey is a problem for Gotham City, not Houston. Image provided by DC Comics Database.

Once Harvey makes landfall, it will start to slow down and its movement could become erratic as there will be little in the way of upper-level wind flow to steer the storm. Many models are now showing a turn towards the west or southwest for a day or two, others show the storm nearly stationary once inland, and still others have the storm drift off towards the east or northeast after landfall. There’s also the chance that Harvey stalls before moving inland. The exact track that Harvey takes will have a huge impact on the region for obvious reasons.

While wind and storm surge are obviously threats to Texas, especially along the coast near where Harvey makes landfall, by far, the bigger threat at this point is flooding from heavy rainfall. The slow movement once inland means that heavy rain will continue across portions of the region for several days, leading to widespread, severe flooding, especially across parts of south and southeast Texas. 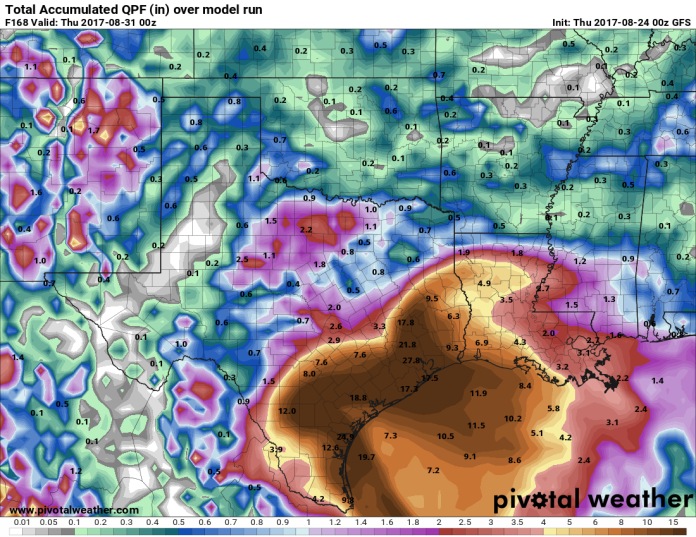 GFS model forecast for rainfall across Texas for the 7 days ending Wednesday August 30. That’s a LOT of water. Image provided by Pivotal Weather.

Some models, such as the one above, are showing the possibility for 10-20 or more inches of rain across parts of the area over the next week. Some models are showing extreme totals of 30-40 or more inches during the same time frame. While these numbers seem unbelievable, they wouldn’t be unprecedented. Hurricanes that move out of the Gulf of Mexico are usually loaded with tropical moisture and if they are moving slow enough, can produce several months worth of rainfall in a matter of days. In 1978, Tropical Storm Amelia dropped 48 inches of rain on Medina, Texas. This is the most rainfall recorded from a single storm anywhere in the United States. Just one year later, Tropical Storm Claudette made landfall near the Texas/Louisiana border. In Alvin, Texas, just west of Houston, a total of 42 inches of rain was recorded in just 24 hours. This set a new record for 24-hour rainfall in the contiguous United States. More recently, in 2001, Tropical Storm Allison produced 20-40 inches of rain on portions of southeastern Texas and Louisiana.

NAM model forecast for rainfall across Florida through Sunday morning. Some flooding seems like a possibility south of I-4. Image provided by WeatherBell.

Meanwhile, a trough of low pressure is drifting across Florida this morning. This system will produce heavy rain across portions of the Sunshine State over the next few days, which could lead to some localized flooding. Once it drifts back into the Atlantic, it will need to be watched for signs of development. While the most likely track for the system, if it develops at all, is to head northeastward out into the open Atlantic, there are some models that show the potential for the system to impact portions of the East Coast early this weekend or next week, as we mentioned at the end of our Weekly Outlook on Sunday. We’ll continue to keep an eye on this system, just in case it does become a threat.

An out-to-sea track still looks most likely, but the potential for trouble along the East Coast still exists. Image provided by the National Center for Atmospheric Research.

One thought on “Houston Might Have a Problem Named Harvey”