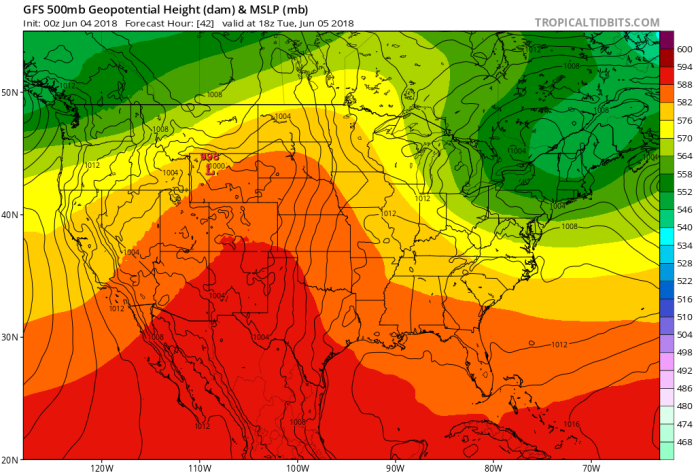 An upper-level low pressure system will cross the Northeast during the first half of the week. That’s probably not going to lead to beach weather. Image provided by Tropical Tidbits.

The week starts off with low pressure moving off the Mid-Atlantic coastline early Monday, moving northeastward, passing south and east of New England during the day. This will bring us rain, possibly heavy at times, along with gusty winds and unseasonably cool conditions. It will feel more like the middle of April than early June. We do need the rain, as May was rather dry, but that probably won’t make you feel much better if you need to venture outside on Monday. High temperatures will only be in the 50s (possibly even upper 40s), which is 15 to 25 degrees below normal. Add in winds of 10-20 mph, with gusts to 30 mph, especially along the coast, and well, Baseball Hall-of-Fame pitcher Dennis Eckersley said it best – “Yuck.” 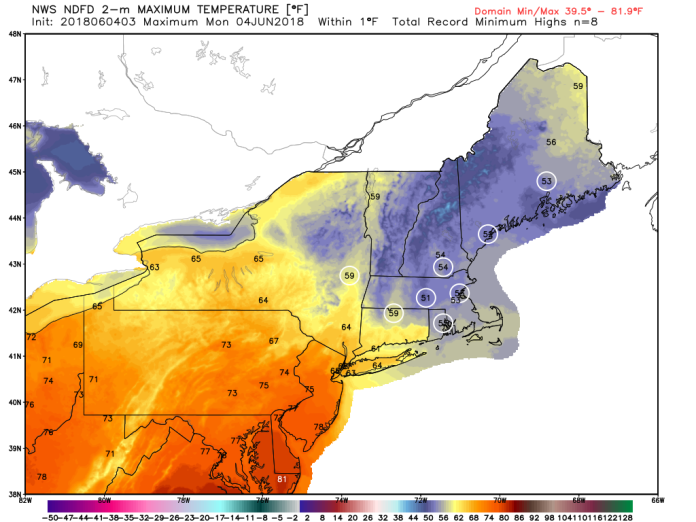 High temperatures in the 50s will likely set new records for the lowest high temperature for the day. Afternoon readings may even be in the 40s across parts of the area. Image provided by WeatherBell.

The coastal low pulls away Monday night and the rain tapers off, so everything gets better on Tuesday, right? As ESPN college football announcer Lee Corso is fond of saying:

Sure, the system will pull away, but an upper-level low pressure system will slowly move across the Northeast Tuesday into Wednesday. As impulses of energy rotate around that upper-level, another surface low-pressure system may even spin up. Whether that happens or not, we’re looking at plenty of clouds along with more showers and drizzle into midweek. Temperatures will remain below normal, but not as chilly as today will be. 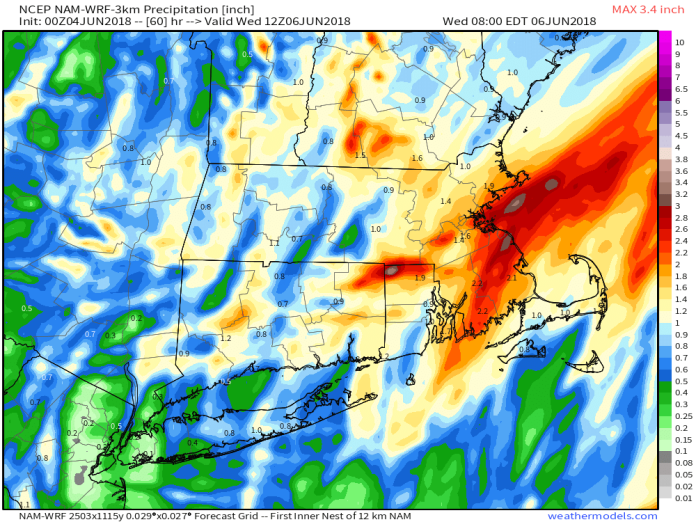 Most of the region could see 1-2 inches of much-needed rain between Monday and Wednesday. Image provided by Weathermodels.com

By Thursday we really do see some improvement. The upper-level low moves out, and high pressure starts to build in, both aloft and at the surface. That means sunshine returns, and temperatures get back closer to normal. Friday should also feature sunshine and warm temperatures. That brings us to the weekend.

Saturday may actually turn out to be a decent day, though a cold front will move through, with some showers or even a thunderstorm possible. The front stalls out just south of the region later in the day, and a wave of low pressure will ride along it. Right now, it looks like that wave will bring in more rain and cool conditions Saturday night into Sunday. Obviously, this isn’t locked in yet, but given the way weekends have gone for the past month or so, would you really be shocked if we had another less-than-optimal weekend? We will break that pattern eventually.

Will the rest of summer feature weather like this? Will it be a scorcher? Or somewhere in between. Our colleagues at Hometown Forecast Services (official employer of StormHQ), issued their summer outlook a few days ago. If you’re interested, give it a read.

Monday: Cloudy and windy with periods of rain, heavy at times. High 50-57.

Tuesday: Some sunshine early, but clouds quickly return by midday, with some showers popping up in the afternoon. Breezy at times. High 62-69, a little cooler along the coast.

Wednesday: Morning clouds and drizzle, some sunshine may develop during the afternoon, still breezy, especially south of Boston. High 57-64.

Friday: A sunny start, clouds increase during the afternoon. High 74-81.

Saturday: Some sunshine early, but clouds thicken up during the day. Rain and showers possible at night. High 75-82, cooler right along the coast.