Yup, you read that headline right – 2018. We’ve entered the final week of 2017. Once we get through our Christmas storm, things are fairly simple (and fairly cold) for a few days. The end of the week and the weekend? That’s another story altogether.

The week starts off with a storm bringing some light to moderate snow to areas north and west of Boston, with rain possibly ending as some wet snow from Boston southward. Our thinking really hasn’t changed much since our blog post on Saturday, and by the time most of you read this the storm will be nearly or completely done, so we won’t waste too much time on it. As the storm moves into the Gulf of Maine, it will rapidly intensify, bringing strong winds to the area during the afternoon. While we’ll still have gusty winds for a few more days, they won’t be anywhere near as strong as we’re expecting today. 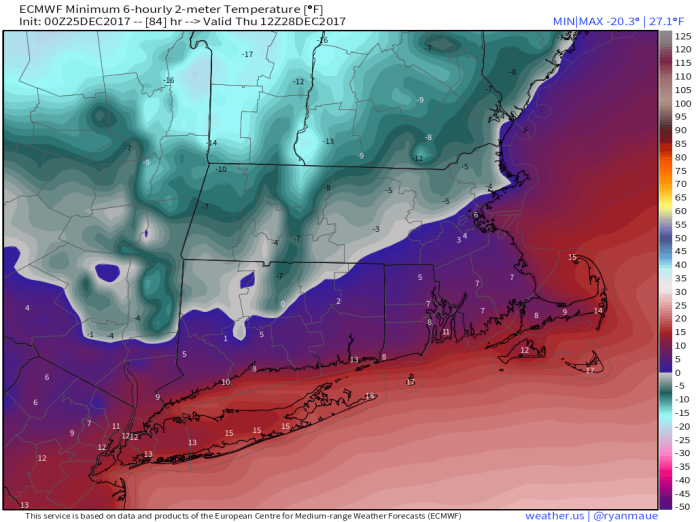 A weak upper-level disturbance moves through on Tuesday, but it’ll just produce some clouds and maybe a stray flurry or two, but the bulk of any snow shower activity will be confined to Northern New England. After that, high pressure builds in with dry and cold conditions. In fact, low temperatures will likely drop below zero for many of us either Wednesday or Thursday morning.

This is how the model forecasts look beyond 3 days at this time. In other words – anyone who tries to give you a forecast with any certainty beyond 3 days has no idea what they are talking about.

After Thursday? Well, there really are no definitive answers at this point. The forecast models are all over their place and their performance beyond 3 days lately could accurately be described as “flaming garbage.”  To give you an idea, here’s what the most recent run of some models show for the Friday through Monday period:

Model 2: A moderate to heavy snowstorm Saturday night into Sunday.

Model 2 Ensemble Mean: A light to moderate snowstorm on Saturday.

Model 3:  High pressure in control with no appreciable precipitation.

As you can see, we’ve got many conflicting possibilities from just 3 models and their ensembles, so how are we supposed to make any sense from that? So, if you hear someone tell you that we’re getting a snowstorm on a certain day next weekend, don’t believe it. At least not yet. That is a low confidence forecast at best.

Monday: Snow ending by midday north and west of Boston, rain possibly changing to snow before ending around midday from Boston southward. Becoming windy in the afternoon with some clearing possible. High 30-37, except 38-45 across southeastern Massachusetts in the morning.

Tuesday night: Clear and cold. Low -3 to +7 north and west of Boston. 8-15 above from Boston southward.

Friday through New Year’s Day: Some unsettled weather is possible, but as we mentioned above, trying to pinpoint any details, including which day, just can’t be done yet. Temperatures will remain below normal.