Severe weather is likely across portions of the Gulf Coast and Mississippi Valley today, but another, perhaps more widespread, outbreak is possible at the end of the week. While that is happening, a snowstorm might also be brewing in the Rockies. Spring can feature a little bit of everything across the nation.

Severe weather is expected across portions of the Mississippi Valley today. Image provided by NOAA.

A strong cold front is moving into the Mississippi Valley and Texas this afternoon, and it is helping to trigger strong to severe thunderstorms across portions of the region. Ahead of the front, temperatures are into the 70s and lower 80s, with dewpoints in the upper 60s and 70s, so there’s plenty of warm, moist air in place. Behind the front, temperatures quickly drop into the 40s and 50s. Thunderstorms will continue to develop in the unstable airmass ahead of the front, with some of the storms containing large hail, heavy downpours, damaging winds, and possibly some tornadoes. Earlier this morning, some storms produced baseball-sized hail and wind gusts in excess of 70 mph in portions of Missouri, Arkansas, and Oklahoma. The threat should start to diminish across the region as we head into the overnight hours.

A more significant severe weather outbreak is possible later Friday into Saturday from the Southern Plains and Texas into portions of the Mississippi and Tennessee Valleys. Low pressure will move out of Texas and head northeastward, drawing warm, moist air northward from the Gulf of Mexico once again. North and west of the system, much cooler air will be in place (more on that in a moment).

Lifted index values of -10 and lower across Texas and the Lower Mississippi Valley show that the airmass will be very unstable on Friday. Image provided by Pivotal Weather.

CAPE values of 4000 J/kg and higher across Texas and the Lower Mississippi Valley show that the airmass will be very unstable on Friday. Image provided by Pivotal Weather.

As low pressure rides along the boundary between the two airmasses, it will help to trigger strong to severe thunderstorms across the region. The threat will continue into the overnight hours Friday night, shifting into the Mississippi and Tennessee Valleys on Saturday as the system continues to progress northeastward. Some of the storms may produce torrential downpours that could trigger flash flooding, large hail, damaging winds, and tornadoes.

The GFS model shows the potential for 5-10 inches of rain (or more) in parts of the Mississippi Valley through Sunday. Flooding is likely. Image provided by WeatherBell.

Behind the storm, as colder air settles into the region, a different threat is evolving – heavy snow. While it’s getting late in the season, heavy snow is not uncommon in the Central and Southern Rockies at this time of year. Some of the higher elevations in Colorado and New Mexico could receive 1-2 feet of snow Friday into Saturday. East of the Continental Divide, especially in the High Plains, snow is also possible, especially from eastern Colorado and western Kansas into portions of the Oklahoma and Texas Panhandles. In Denver, there is still a big question as to whether to precipitation falls mainly as rain, snow, or a wintry mix. Some snow accumulation seems likely at this point, but it’s still a little too early to tell whether there will be heavy snow in the city itself. The heavy snow threat will expand into the portions of the Upper Midwest and southern Canada Sunday into Monday as the storm moves into that region.

GFS model forecast for snowfall in the Rockies and High Plains through Sunday. Winter is definitely not over there. Image provided by WeatherBell.

Severe weather outbreaks are not uncommon at this time of year. In fact, from late March into early May is when they are most likely. The largest tornado outbreak on record occurred 6 years ago this week. Between April 25 and 28, 2011, a total of 362 tornadoes were observed from Texas to New York and portions of southern Canada, resulting in 324 fatalities, 317 of them on April 27, the most active day. 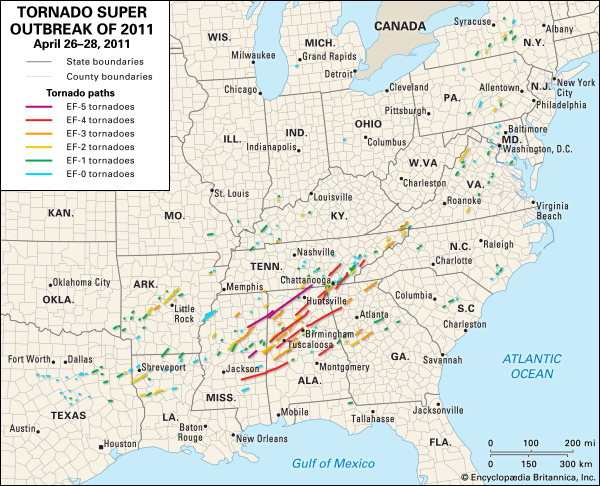 Map showing tracks of all 362 tornadoes from the April 2011 “Super Outbreak”. Image provided by Encyclopedia Brittanica.

As for our part of the country – the clouds and rain and cool temperatures will eventually move out. Things will start to improve on Thursday with some sunny breaks possible and temperatures into the 60s. By Friday, there will be more sunshine and temperatures getting into the 70s. Saturday looks like the best day, as temperatures could get into the lower 80s in some spots. We will have to watch out for some late-day showers and maybe a thunderstorm. Sunday looks to be significantly cooler thanks to a northeast wind off of the still-chilly Atlantic.