October can be a time of change in the Northeast. While the first thing that comes to mind is the changing colors of the foliage across the region, the weather also changes, sometimes quite frequently. That’s what we’re going to be dealing with for the next few days. 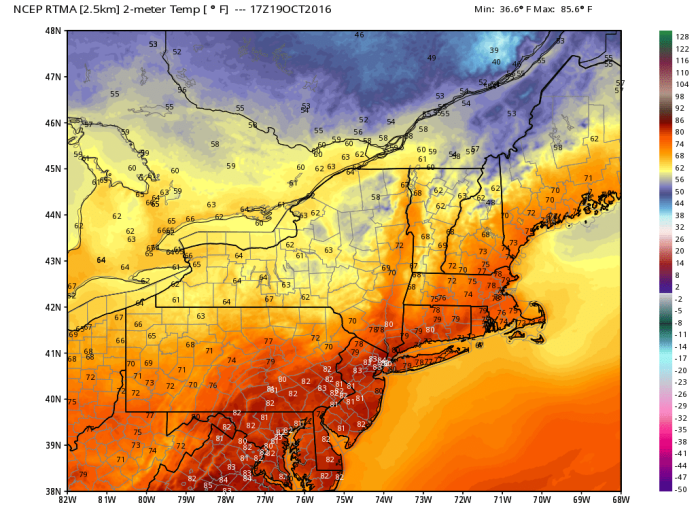 Current temperatures across the Northeast as of 1pm on October 19. Image provided by WeatherBell.

It’s an unseasonably warm afternoon across much of the Northeast, with temperatures generally in the 60s and 70s, with 80s from southern Connecticut into the Mid-Atlantic states. Dozens of record highs have been set over the past few days, and more are falling today. However, some changes are coming, and the warm weather will be a distant memory within the next 24-48 hours.

A cold front is moving across the region this afternoon, though you really couldn’t tell, as there’s only scattered cloud cover and little precipitation with the front. That front will stall out to the south of New England tonight. On Thursday, a wave of low pressure will start to approach from the west. This will spread rain and showers into the region. Some of the rain will be heavy, especially from New York into Pennsylvania late Thursday into Friday. With rainfall totals of 1-3 inches and locally up to 5 inches expected, some flooding is likely. Across New England, where a serious drought is ongoing, rainfall will be much lighter, with most locations likely receiving under half an inch of rain. 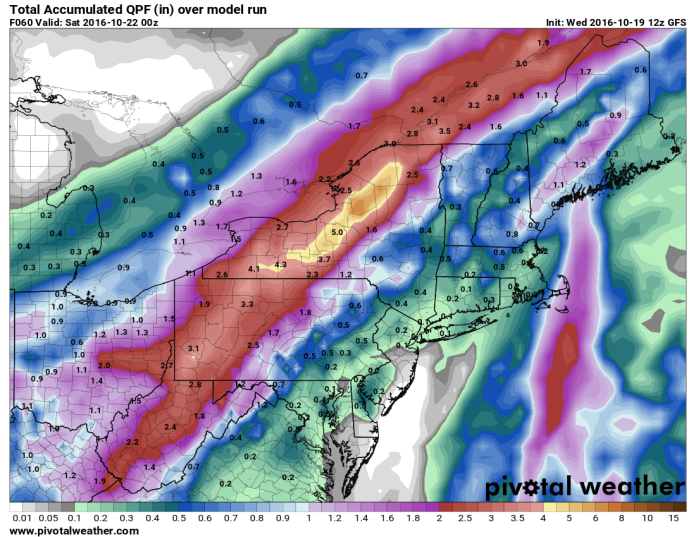 Expected rainfall through Friday evening across the Northeast. Image provided by Pivotal Weather.

As that wave of low pressure moves into Upstate New York on Friday, it will lift that cold front back across New England as a warm front. While Friday won’t be as warm as today, temperatures will still get into the 60s and lower 70s across much of New England. With dewpoints also in the 60s, it will be a rather muggy day for mid-October. 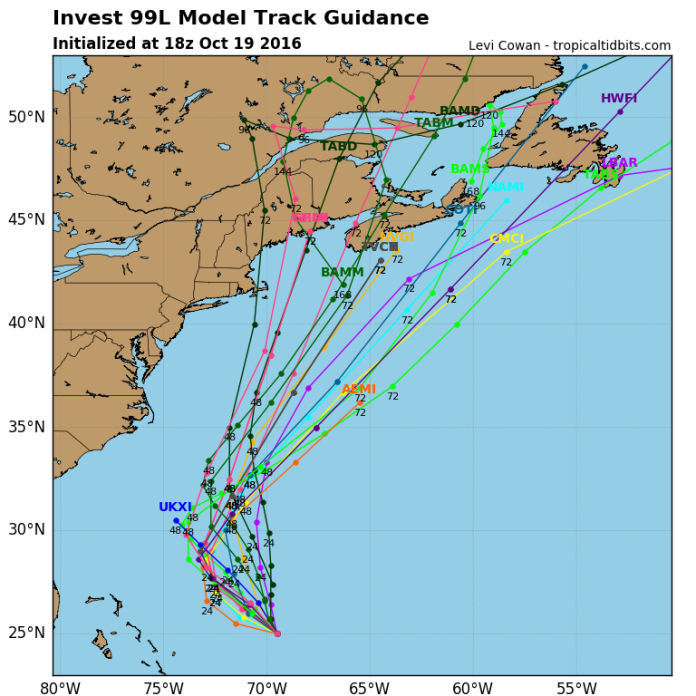 Computer model forecasts for the track of a tropical disturbance in the Bahamas. Image provided by Tropical Tidbits.

Meanwhile, there is a tropical disturbance brewing in the Bahamas right now. While conditions are favorable for development, we’re not looking at another monster like Matthew, it could become a tropical depression or subtropical storm over the next few days. The system will likely head northward, moving towards the Gulf of Maine as we head into the weekend. This will bring another round of heavy rainfall into Maine and Atlantic Canada, again missing most of Southern New England, where the rain is most needed. 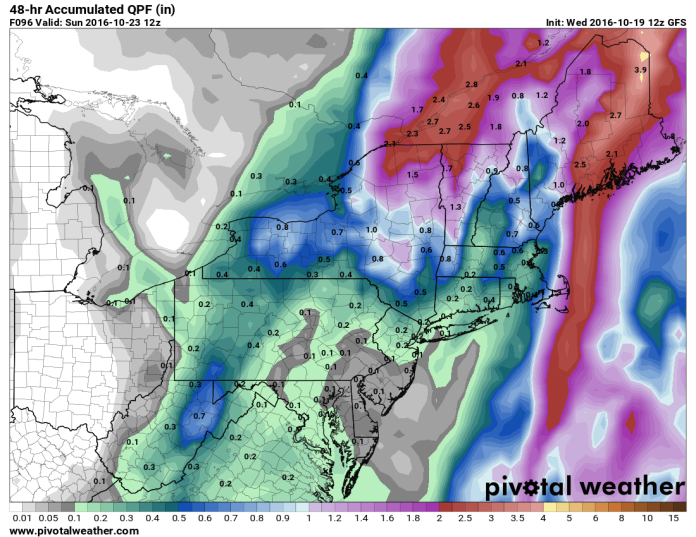 Expected rainfall between Friday morning and Sunday morning across the Northeast. Image provided by Pivotal Weather.

Once the system moves into southeastern Canada, it is expected to stall out under an upper-level low pressure area and become a strong extratropical system. It will drag a cold front across the Northeast, bringing much colder air into the region. With strong low pressure nearby and much colder air filtering in, rain will change over to snow across portions of Upstate New York and Northern New England. While the snow will be confined mainly to the higher elevations, this is the first accumulating snow of the season across the area. Several inches may accumulate across parts of the Adirondacks and the Green Mountains. 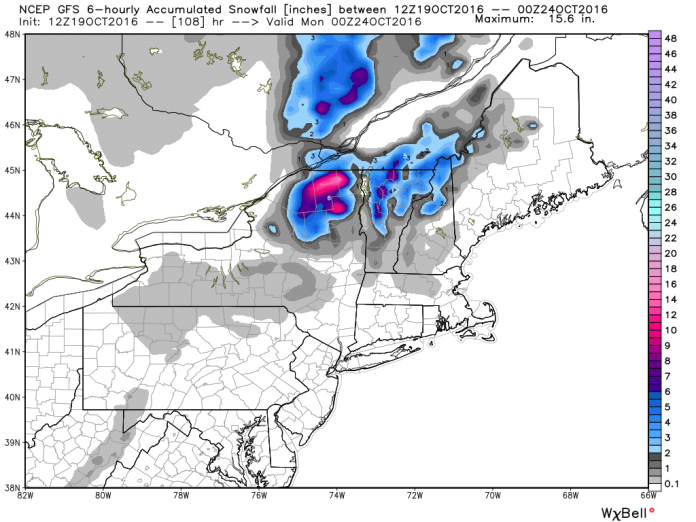 Expected snowfall through Sunday evening across the Northeast. Image provided by WeatherBell.

While there could be a few wet flakes mixed in with some of the rain across lower elevations of Central New England, accumulating snow is not expected.Sunday will be a chilly day, with highs only in the 40s and 50s across much of the Northeast. These readings are 10-20 degrees below normal. Of course, any mention of snow in October across the Northeast will make residents think back just a few years to the pre-Halloween snowstorm that dropped 1-2 feet of snow across parts of the region, setting numerous records. While this system won’t come anywhere close to that, it should make for some spectacular photos of snow-capped mountains and valleys filled with colorful foliage early next week. 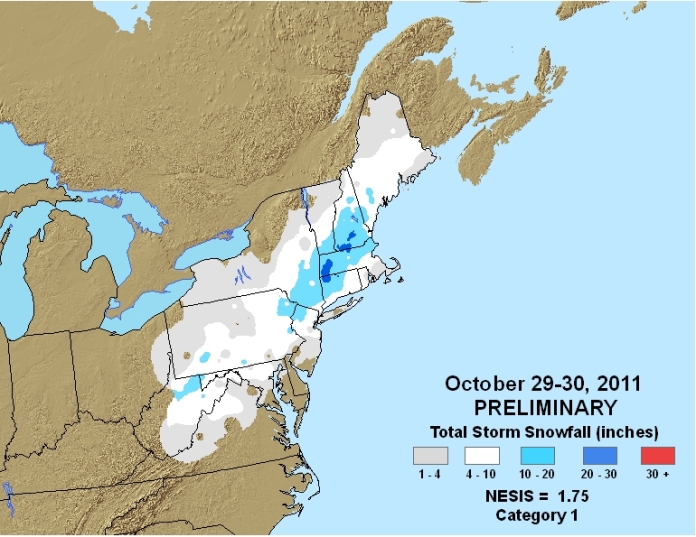 Snowfall from the Halloween snowstorm of 2011. Image provided by NOAA.