How many of you saw the reports of 1-2 feet of snow in North Carolina and Virginia over the weekend and said to yourself “better there than here”? We don’t have anything like that in our near-future, but that doesn’t mean the week will be snow-free.

The week starts off with high pressure building in for today and into Tuesday. That means plenty of sunshine and cool temperatures. We may see some clouds and possibly a flurry across the Outer Cape, but otherwise, dry and cold. Tuesday night into Wednesday could be a little interesting though. Low pressure will pass well offshore, but an upper-level disturbance will be moving through at the same time. With cold air in place and north-to-northeast winds blowing over the relatively mild Atlantic, we could see some ocean-effect snow right along the coast. This is the same mechanism that produces lake-effect snow around the Great Lakes. Most of this snow will be confined to coastal areas, especially coastal Maine to Cape Ann, and eastern Plymouth County over to Cape Cod. We’re not expecting much more than a dusting to an inch for these locations, though a few spots, especially on Cape Cod, could see a couple of inches if one of these bands off the ocean stays in place long enough.

A little bit of snow is possible on Wednesday right along the coast. Image provided by WeatherBell.

High pressure builds back in on Thursday with another shot of dry and cold air, but it will be short-lived as milder air (and clouds) start to move in on Friday ahead of the next storm system. There’s still a lot of questions with this system, namely where it actually tracks, but it does look to be milder, so we’re probably talking about rain (because we haven’t had enough of that in the last 3 months!) Some models show the potential for heavy rain, others don’t have as much. Some have it getting quite mild on Saturday, while others have it mild, but not that warm. As long as you’re not shoveling it, you probably don’t care that much, right? A second storm likely follows on Sunday, but this one looks like it will remain well to the south, likely too far south to have much, if any, impact on the region, other than to help drag more cold air down from Canada. 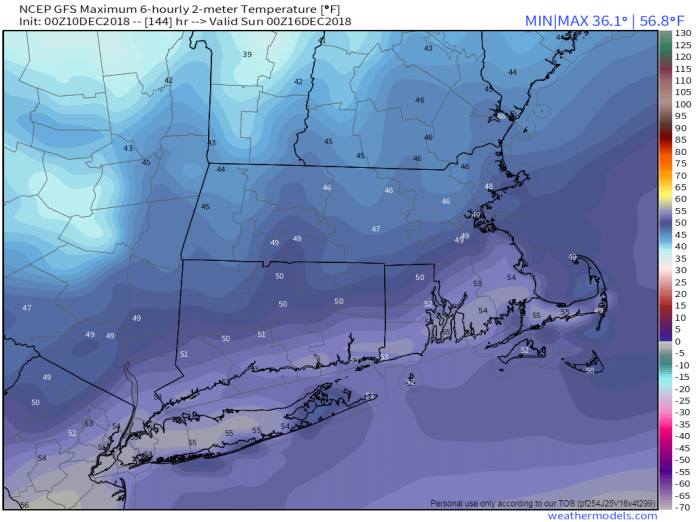 At least one model shows the potential for a mild day on Saturday, though it could be quite wet. Image provided by Weathermodels.com

Tuesday: Plenty of sunshine, except for Cape Cod once again. High 30-37.