Billy Joel was right – there’s a storm front coming. And going. And coming. And going. Actually, it’s more of a stationary front that will ripple north and south as waves of low pressure ride along it this week. When it heads north, we’ll be warm. When it heads south, we’ll be cooler. There will also be periods of showers and thunderstorms. Let’s see if we can sort of the timing of these waves.

A general west-to-east flow is expected across the Northeast this week, which is why we’re not expecting any big storms. We’ll just have waves of low pressure riding along a frontal boundary every few days, giving us some bouts of unsettled weather, Loop provided by Pivotal Weather.

We’ll start the week off with that front off to our south. However, it’s far enough to the south that we’ll get plenty of sunshine, so temperatures will actually be fairly mild. In fact, away from the coastline, temperatures should get into the 70s. By Tuesday, however, things change. Our first wave of low pressure heads toward the region. This will lift the front northward, bringing us warm and humid conditions, but also clouds, showers, and possibly some thunderstorms. 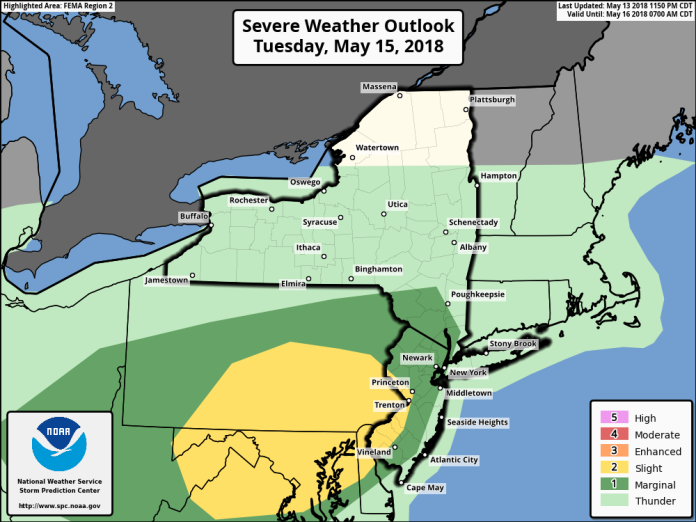 Some thunderstorms are possible on Tuesday, but the best chance for any severe weather will be off to our southwest – in the Mid-Atlantic states. Image provided by the Storm Prediction Center.

The showers may linger into Wednesday morning before the front slips southward again. That means Wednesday could be another cloudy and cool day across the region, with some sunshine possible in the afternoon. The front heads far enough southward again on Thursday to allow for plenty of sunshine and mild temperatures once again.

Thursday looks like the pick of the week right now. Sunshine and temperatures well into the 70s away from the coast, possibly even some lower 80s. Image provided by Weathermodels.com

This brings us to Friday. Another wave of low pressure will move towards the region from the west. However, clouds will stream in ahead of it, and this will keep temperatures on the cool side again. This wave will bring us showers late Friday into Saturday, some of which could be heavy. As the wave heads to our north and west on Saturday, it should lift that front northward again, allowing the milder air back in, despite the cloudcover and showers.

The big question now is – what does Sunday bring? Low pressure will pass well to our north and west, so it will eventually drag a cold front across the region. Right now, it looks like that cold front will hold off until Sunday night or even Monday. So, we should be fairly warm. We’re fairly confident in that. It’s the other part of the equation that we’re not so sure about. We could stay most cloudy with occasional showers and possibly a thunderstorm. We could also break out with some sunshine, and have a warm and humid day with a chance for a few showers and thunderstorms. At this point, we’ll lean towards the latter scenario, but if you’ve got any outdoor plans, just keep an eye on updated forecasts during the week.

Monday: Sunshine filtered through some afternoon high clouds, especially south of Boston. High 69-76, except 61-68 right along the South Coast and across Cape Cod.

Tuesday: Intervals of clouds and sunshine and breezy with a chance for showers and thunderstorms. High 76-83 inland, 68-75 along the South Coast and across Cape Cod.

Wednesday: Showers ending in the morning, mainly south of Boston, some sunshine develops in the afternoon, especially across southern NH and northern MA. High 57-64, coolest right along the east coast.

Thursday: Sunshine and some high clouds again. High 74-81, cooler along the South Coast and across Cape Cod.

Sunday: Partly sunny and breezy with a chance for showers and thunderstorms. High 70-77.

Satellite loop of the disturbance in the eastern Gulf of Mexico early Monday morning. Loop provided by NOAA.

Finally, even though hurricane season doesn’t start officially until June 1, we’ve got an area of disturbed weather in the Gulf of Mexico that is being watched for development. Right now, it’s a weak disturbance that is interacting with an upper-level low pressure system. It’ll drift northward over the next few days, bringing some heavy rain to Florida and parts of the Southeast. It could developing into tropical depression or a subtropical system, but that is not likely at this time. By late in the week, it should move inland over the eastern Gulf Coast, and the moisture should ride up the Appalachians. This could give us some heavier rainfall over the weekend and into early next week as that cold front moves through.