While Irma continues to plow further into Florida and Jose spends some quality time over the open Atlantic, we’ve got a nice quiet week on our hands, thanks to a large area of high pressure. Not only will it be quiet, it’ll be warm too.

First, we’ll talk about the tropics. Irma continues to move northward across central Florida while weakening early this morning. Irma will weaken to a tropical storm during the day on Monday while turning more towards the northwest. The center of Irma should move across southern Georgia, and then up towards the Tennessee Valley, where it will likely dissipate towards the middle of the week. Winds will still be a major problem across Florida today, especially central and northern Florida, but the bigger threat will shift to rainfall as we head through the day and into mid-week. Additional rainfall totals of 6-12 inches or more are expected across northern Florida and southern Georgia, with 2-6 inches possible from the Tennessee Valley into parts of the Carolinas. This will likely lead to flooding in some areas. While some of this moisture will stream up here in the form of clouds, only a few showers are possible, as high pressure keeps the rain bottled up to our south.

Heavy rain will likely lead to flooding across the Southeast over the next few days thanks to Irma. Image provided by WeatherBell.

We also are keeping an eye on Hurricane Jose. Early this morning, Jose was a few hundred miles east of the southern Bahamas with top winds near 100 mph. Jose will likely weaken a bit, and stall out or move very erratically for the next few days. As we get towards midweek, Jose may start to strengthen again while turning back towards the west, before eventually turning northward. While it is possible that Jose could be a threat to the East Coast, sometime next weekend or early in the following week, that threat is fairly low at this point. Yes, a couple of the computer models have shown a rather strong Hurricane Jose heading right up the East Coast around 10-12 days from now, but those models have problems picking out where things will be 3 days from now, never mind 10 days from now. In fact, 10 days ago, some of those exact same models showed Irma making landfall in New England. They were only off by over 1000 miles. In other words, despite seeing people post scary looking maps on Facebook and Twitter and telling you to start preparing now because New England could be next, we wouldn’t worry too much about it. If there is going to be a threat, we’ll let you know well in advance. 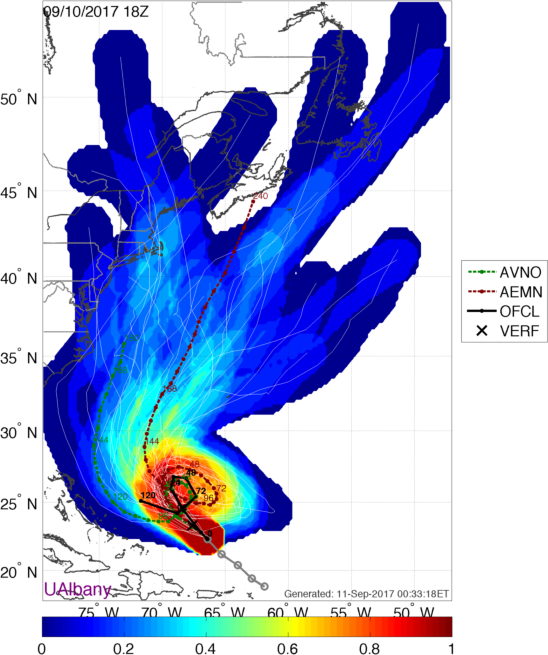 Despite what you may have seen on the Internet, Hurricane Jose is not a threat to any land areas over the next 5-7 days, except possibly the Bahamas. Beyond that, there is a low threat to the East Coast, but a track out to sea is still more likely. Image provided by the University at Albany.

As for our actual forecast, well, that’s pretty easy. High pressure keeps us warm and dry through at least Thursday. A weak front may try to drop down into the region with some cooler conditions and possibly a few showers late in the week. Next weekend looks cooler, but likely still dry, as high pressure tries to build back into the region.

Tuesday is looking like the pick of the week with sunshine and temperatures in the 80s. Normal highs for mid-September are in the middle 70s. Image provided by WeatherBell.

Friday: Intervals of clouds and sunshine with some showers possible. High 73-80, possibly cooler right along the coast, especially in the afternoon.

Temperatures will top 90 in parts of Montana today. By the end of the week, it could be snowing there. Yup, it’s getting to be that time of year. Image provided by Pivotal Weather.