A ridge of high pressure over the Plains states will slowly shift westward over the next few days, with intense heat across the Plains heading for the Desert Southwest.

High temperatures soared well into the 90s across the Southern Plains on Wednesday, but when the humidity was factored in, the heat index exceeded 100-110 degrees in parts of the nation’s midsection.  Only a few showers and thunderstorms provided scattered relief to the region. On Thursday, with similar conditions expected across much of the Southern Plains and parts of the Mississippi Valley, heat advisories have been posted for much of the region. High temperatures will be well into the 90s once again with some triple digit readings expected. When the humidity is factored in, heat index values will be in the 100-115 degree range across the region.

While the nation’s midsection has been enduring the heat, a trough of low pressure has been keeping the West cool for the past few days. Temperatures have been as much as 10 to 20 degrees below normal, especially across the Pacific Northwest. Across the higher elevations of the Cascades, several inches of snow has been reported.

While the Northwest will remain cool into the weekend, much warmer weather will move into the Southwest as a ridge of high pressure builds westward. By Saturday, temperatures will be 10-20 degrees above normal in the Desert Southwest. For a place that is “normally” hot, anomalies that big can break records. In Phoenix, high temperatures could approach 120 degrees on Sunday. The record high for that day is 115, set in 1968. 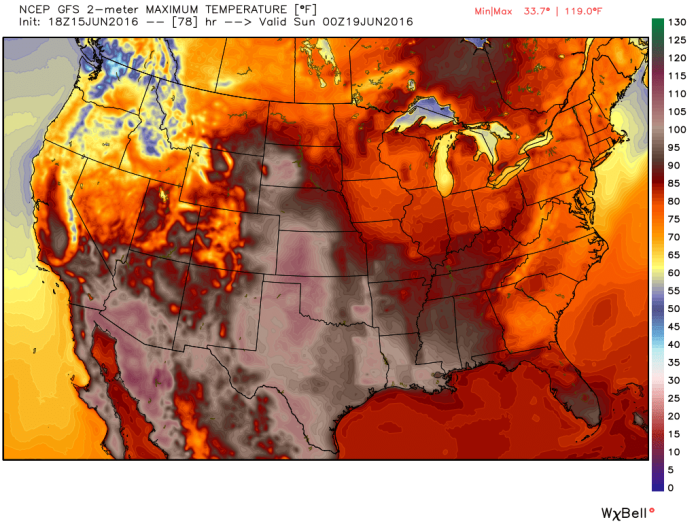 Excessive heat watches have been posted for much of the Southwest from Saturday through Tuesday. The hottest days look to be Sunday and Monday, when high temperatures will likely exceed 110 degrees in Las Vegas, and could approach 120 degrees in Phoenix and Yuma. In Death Valley, California, high temperatures on Sunday and Monday could approach 125 degrees.

While temperatures may drop a few degrees later in the week, the ridge of high pressure is expected to remain in place across the Southwest right through the end of the month, keep temperatures above to well above normal.

Here in New England, high pressure will keep us dry and seasonably warm right into the start of next week. Temperatures could get well into the 80s Monday and Tuesday, but no sustained heat is expected for at least the next 10 days.