Earlier today, Tropical Depression Two “strengthened” into Tropical Storm Bonnie off the South Carolina coastline. In related news, Pablo Sandoval was overwhelmingly voted as the fan favorite on the Red Sox. In other words, “Bonnie” is in all likelihood NOT a tropical storm.

See if you can find the “center” of Tropical Storm Bonnie. (Hint: It’s not under the thunderstorms, like you would normally expect). Loop provided by NOAA.

For now, we’ll play along and pass along the details of the storm. As of 8pm EDT, TD 2, er, Tropical Storm Bonnie was centered about 135 miles south-southeast of Charleston, South Carolina and was stationary. Maximum sustained winds (likely found in one thunderstorm somewhere in the vicinity of the storm) are near 40 mph. A Tropical Storm Warning remains in effect for the coast of South Carolina from Savannah River to Little River Inlet. The official forecast from the National Hurricane Center calls for some additional strengthening before the storm makes landfall in South Carolina on Sunday.

On Sunday “Bonnie” moves inland, weakens, and dissipates. End of story, right? Not for those of us in New England. Even though “Bonnie”doesn’t look like much, it will have a big impact on our Memorial Day weather. A backdoor cold front will move across the region early Sunday, bringing an end to the heat we’ve had for the past few days. High temperatures on Sunday will be 15-25 degrees colder than Saturday, with coastal areas staying in the 60s, while inland locations reach the 70s. You’ll need to head to the Connecticut Valley to find readings in the 80s. The cooler conditions will be accompanied by clouds and a few showers. 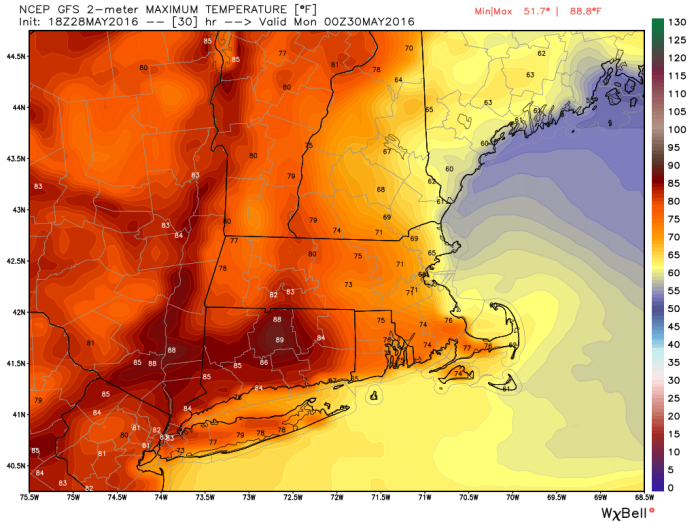 High temperature forecast for Sunday from the GFS. Image provided by WeatherBell.

For Memorial Day, things aren’t looking pretty. With the jet stream configured in a pattern that basically goes from south to north along the East Coast, the moisture from “Bonnie” will head right up the coastline, and into New England for Monday. That means that we’re in for a good slug of rainfall for Monday, especially during the morning hours. The Spring has been really dry, so we definitely need the rain, but unfortunately, it has to fall on Memorial Day. If you made plans to head to the beach or grill up some burgers and dogs, start looking for alternate ideas. It’s going to be cloudy, wet, and only in the 60s to lower 70s for high temperatures.

At least most of next week looks dry and warm with high pressure in control. So, we’ve got that going for us.