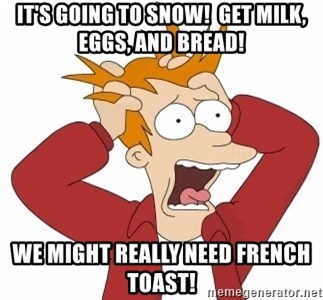 You’re heard the phrase a million times: “March comes in like a lion and goes out like a lamb.” Well, the first half of that statement certainly was accurate this year, as much of the Northeast took a beating from last Friday’s storm. While many places are still trying to recover, we’ve got another one on our doorstep, and this one is promising to be more white than wet for much of the region.

The low pressure system that brought blizzard conditions to the Northern Plains and Upper Midwest over the past 36-48 hours will cross the Ohio Valley this afternoon and evening. By tonight, a secondary area of low pressure will develop off the North Carolina coast, and rapidly strengthen as it heads up the East Coast. It will likely pass very close to, possibly right over Cape Cod late Wednesday night, then move into the Gulf of Maine on Thursday. The exact track of the system will play a gigantic role in determining how far inland the rain/snow line penetrates. Some models keep the storm south and east of Nantucket, which could keep the rain/snow line confined to southeastern Massachusetts. Some models bring the storm across southeastern Massachusetts, with the rain/snow line getting as far inland as Springfield, MA and Manchester, NH. These are the two extremes, and much like Goldilocks and the Three Bears, we’re looking for something more in the middle.

There are a few different aspects of this storm that we need to worry about, depending on where you are located – strong winds, heavy rain, and heavy snow. We’ll start with the winds.

Many parts of the region, especially along the coast and in southeastern Massachusetts and Rhode Island are already sensitive to hearing a forecast for strong winds, after last Friday’s system took down so many trees and knocked out power to hundreds of thousands of residents. Thankfully, winds won’t be as strong with this storm, but they’ll still be capable of causing damage, especially to trees already weakened by the last storm. Winds will pick up during the day on Wednesday, likely peaking Wednesday night into early Thursday. Sustained winds of 25-40 mph, with gusts to 60 mph are expected,especially along the coast. Luckily, tides are not as high as they were a few days ago, so coastal flooding isn’t as much of a concern, though some splashover is certainly possible around the time of high tide. As the storm passes by early Thursday, winds will shift into the northwest and start to ease. However, this storm will likely move into Atlantic Canada and not move much for a few days, so we may still be dealing with gusty winds (just not as strong), right through Friday.

Next up is heavy rain. As we mentioned earlier, the rain/snow line is still a big question. However, in areas that stay all rain or mostly rain, such as Cape Cod, parts of southeastern Massachusetts and Rhode Island, rainfall will be heavy. Many places could see more than an inch of rain, possibly even 2 inches in spots. These are areas that saw 2 to as much as 5 inches of rain from the last storm. The ground is still saturated in parts of the region, and most of the rivers and streams remain fairly high. If you add another 1 to perhaps 2 inches of rain in a short period of time, you’re looking at more flooding in some areas.

Now, to the part that most of you want to know about – heavy snow. As the last paragraph and the map above show, this system will contain plenty of moisture. Away from the coast, temperatures will be near or just below freezing. That means that moisture will fall in the form of heavy, wet snow. The general rule of thumb is that 1 inch of rain equals about 10 inches of snow, but that is dependent on temperature. That’s why when temperatures are in the teens you get a fluffier snow where 1 inch of rain could mean 20 inches of snow. In cases like this, where temperatures will be close to freezing, that ratio could be closer to 8-to-1 (or even lower). Still, even at 8-to-1, you only need an inch and a half of rain to get a foot of snow. Complicating things is the rain/snow line. Places that see rain mix in will get significantly less snow than nearby areas that have no rain at all. Our best estimate right now is that the rain/snow line gets as far inland as Interstate 95, possibly a few miles farther. As the system passes by on its way into the Gulf of Maine on Thursday, that rain/snow line will crash southeastward towards the coast, changing everyone back over to snow before everything winds down Thursday afternoon. So, what does that mean for amounts?

Finally, there’s the timing of this system. Snow will develop across the region around midday Wednesday, give or take an hour or two. Due to the higher sun angle at this time of year, it will have trouble accumulating on pavement at first, though grassy areas could see some accumulation. The snow will quickly change to rain across southeastern Mass, southern Rhode Island, and Cape Cod. The rain/snow line will continue moving northwestward, likely reaching the I-95 corridor near the evening rush hour. At the same time, the steadier and heavier precipitation will arrive. During Wednesday evening and night, snowfall may accumulate at the rate of an inch or more per hour. If you don’t have to be out Wednesday night north and west of Boston, then don’t. Driving conditions will likely be rather poor. The rain/snow line will crash to the coast early Thursday morning, with the steadiest precipitation winding down towards daybreak. Occasional snow showers may continue off and on through the afternoon, but most of the accumulating snow should be done in the morning. Expect a lot of school cancellations on Thursday, especially north and west of Boston.

If you’re wondering if this is winter’s last gasp – don’t count on it. Some of the models show the potential for another system early next week, but it’s still several days away, and there’s plenty of disagreement among the models as to the evolution of that system. We’ll worry about that, if we need to, this weekend.