Do not panic! Water is going to fall from the sky today. This is actually a normal circumstance. We haven’t seen it happen that much in the past several months, but it does actually happen from time to time. There’s even a technical term for it – “Rain”.

We really need this rain, as the drought we’re in just keeps getting worse and worse. Much of the region is now in severe or extreme drought, and while today’s rain will help, it will barely put a dent in it. What we need is numerous episodes of rainfall spread out over time, and the chances of that happening should start to improve as we head deeper into fall and winter.

How much rain we get today is still a big question mark, as you can see by these two model forecasts. We could get a little, we could get a lot. At least we’ll get some rain. Of course, after today’s rain, we probably won’t see much more until a cold front comes through Friday night. Before that, we’ll have high pressure bringing us dry and warm weather once again. As for next weekend, once the front goes through, high pressure returns with more dry weather. Notice that we didn’t say more “dry and warm” weather. That’s because next weekend looks significantly cooler. How much cooler? How does highs in the 60s and lows in the 40s sound? It sounds like late September to us. While these temperatures are actually a little below normal, given how warm the past few months have been, it’ll feel like it’s a lot cooler than it really is. 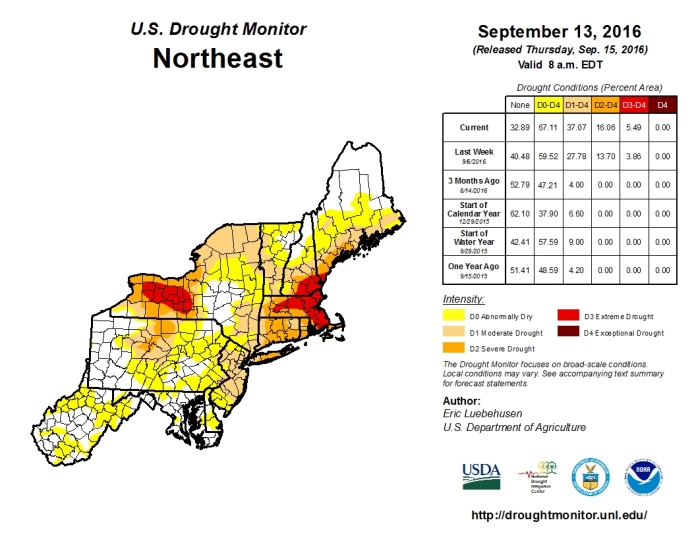 Latest drought update showing Severe to Extreme Drought across much of central and Southern New England. Image provided by US Department of Agriculture.

Monday: Cloudy with periods of rain and showers expected. Some localized downpours are possible. High 71-78.

Wednesday: Sunshine and a few clouds.High 76-83.

Friday: Increasing clouds, showers are possible late in the day and at night. High 77-84.

Saturday: Intervals of clouds and sunshine, just a slight chance for an afternoon shower.  High 64-71.

Finally, because we like to entertain you at times, but also let you know what’s coming, we decided to end this week’s outlook with a good laugh for everyone. There’s a model called the CFS. It’s used for long-range forecasting, and it’s really not that good. However, sometimes, it’s fun to look at. While most models only go out a few days, we have a few that go out 10 to 16 days. This model however, goes out months. On one site that we use to look at this model, it goes out 32 days. Today’s Day-32 map was quite interesting, and is not likely to happen, but what the heck, let’s have some fun. 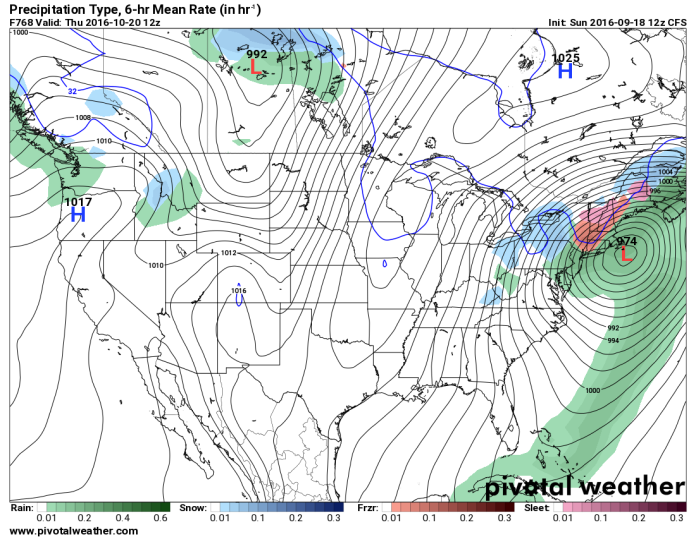 CFS model forecast for the morning of October 20. Yes, that’s a wintry mix across much of New England as a powerful coastal storm passes close to Nantucket. No, we don’t believe it either. Image provided by Pivotal Weather.