After a rather slow start to the Hurricane Season, the Eastern Pacific has gotten very active, setting records in the process.

Late Friday morning, Tropical Depression Eight-E strengthened into Tropical Storm Georgette, the seventh named storm to form in the Eastern Pacific this month. This ties July of 1985 for the record for most storms to form during the month of July in the Eastern Pacific. as of 8am PDT, Georgette was centered about 870 miles south of Cabo San Lucas, Mexico, moving toward the west-northwest at 13 mph. Georgette had maximum sustained winds near 45 mph, and additional strengthening is expected. Georgette could become a hurricane this weekend while moving across the open waters of the Eastern Pacific Ocean. 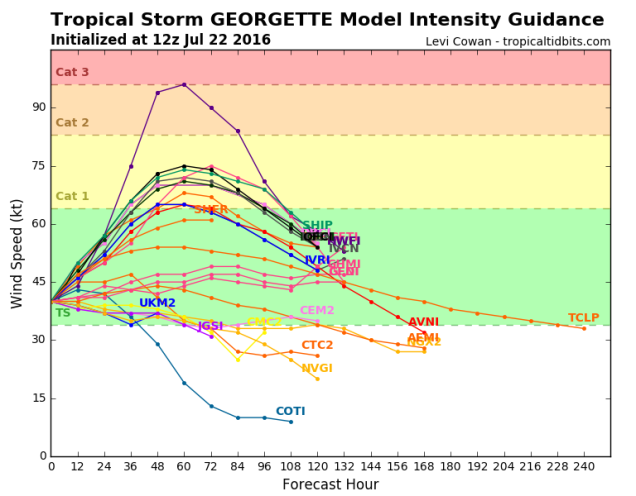 Closer to Mexico is Tropical Storm Frank. As of 8am PDT, Frank was centered about 235 miles west-southwest of Manzanillo, Mexico with top winds near 50 mph, moving towards the northwest at 14 mph. Frank is expected to continue moving toward the northwest this weekend with some additional strengthening possible. Frank could become a hurricane before a weakening trend starts. By the end of the weekend, Frank is expected to start weakening while moving over colder waters west and southwest of Baja California. While Frank does not appear to be a threat to land at this time, anyone with interests in the Southern Baja Peninsula should monitor Frank’s progress, in case it tracks a bit farther east of the current projections.

To the west, Tropical Storm Estelle was centered about 1500 miles west of Cabo San Lucas, Mexico as of 8am PDT. Estelle continues to weaken, with maximum sustained winds down to 40 mph. Estelle is expected to dissipate over the open waters of the Eastern Pacific this weekend.

Despite all the activity in the Eastern Pacific, most of the attention is centered on the Central Pacific Ocean, where Tropical Storm Darby is bearing down on Hawaii.

As of 5am HST, Darby was centered about 390 miles east of Hilo, HI moving toward the west at 12 mph. Maximum sustained winds have decreased to near 60 mph, and some additional weakening is expected. Darby is expected to turn more towards the northwest this weekend, passing very close to or right over portions of the Hawaiian Islands. A Tropical Storm Warning has been issued for the island of Hawaii, and a Tropical Storm Watch has been issued for the islands of Maui, Molokai, Lanai, and Kahoolawe. While Darby may bring gusty winds, possibly to 50 mph at times, to portions of Hawaii this weekend, the main threat will be rainfall and resultant flooding. Rainfall totals of 5-10 inches are possible, with some heavier amounts expected. Conditions should improve across the islands by Monday as the storm pulls away from the region and continues to weaken.